I remember at San Francisco State University the only refuse stations that had three bins; Compost, Recycling and Trash, were located by the student center. Everywhere else on the large campus was just a single Trash can, and sometimes there was a Recycling bin. But looking into the cans it was easy to see people didn't pay much attention to what they threw away into what can, as long as they threw it away... But few people realize that the "away" in "throw away" is a myth. There is no such place as "away" People are usually more concerned to throw their trash out of sight, thus, they don't take much notice to what trash belongs in which bin.

I think this is because in America there are many places to hide all our garbage. I am often reminded by the locals that Taiwan is a very small island. There is certainly no such place as "away" here. The recycling program that Taiwan government put into effect in the 1990's is very comprehensive. First off, and what I feel is most important, it is ILLEGAL To Not Recycle. Residents that do not properly separate their Recyclables from not Recyclables (as well as Compostables) are fined by the Taiwan Environmental Protection Agency for not complying. I could only imagine some crazy folks back home getting hit with that fine and arguing something like "It's my right as an American NOT to recycle!" anyway....

Not only is there lots of recycling going on, it is very thorough recycling. As you can see in the pictures below (this is in a hallway of the Foreign Language Department at National Taiwan University) there are four cans sitting together. PAPER, ALUMINUM PACKAGING, PLASTIC BOTTLES, then TIN & ALUMINUM CANS.  Six feet away, on the other side of the hall you have PAPER CONTAINERS (i.e. coffee cups) and PLASTIC CONTAINERS (i.e. lids, plastic cups). In the States, these six recycling bins are all condensed into the single Blue Can. 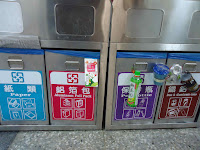 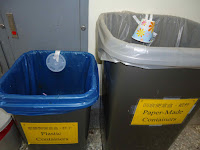 Recycling in Taiwan is a source of Civic Pride. The people realize what a small place they live in, and if they were to handle there trash situation they way most of the world does, it wouldn't take long before their tiny island is engulfed in garbage and turned into a pretty shitty place to live. They recycling rates have improved so much with the new recycling regulations put into place over the last few decades, that government officials from countries throughout Asia and Europe are coming to Taiwan and taking notes on how to drastically reduce the amount actual "Garbage" while increasing the amount of recyclables that can go back into the system as Raw Material (a small island like Taiwan doesn't have limitless raw material) So, Recycling, as handled in Taiwan makes good environmental and economical sense.
SIDE NOTES; Tomorrow I'm heading to Taizhong 台中 to participate in my first ever Bike Polo Tournament in Taiwan, HOORAY!!! On campus today I found a place to practice piano after class, HOORAY!!!
New Chinese Words Of The Day (other than lesson vocab) －發抖 fādǒu To Shake (i.e. too much coffee)。  －驚訝 jīngyà Surprised，Amazed。－要緊 yàojǐn Essential。
Posted by brendan at 4:39 PM

Email ThisBlogThis!Share to TwitterShare to FacebookShare to Pinterest
Labels: Life in Taiwan