What can be done? 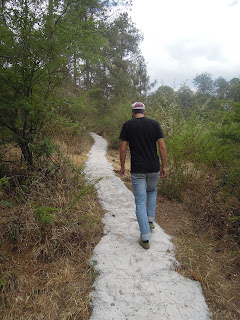 I often go running in the forests and foothills of Horse Saddle Mountain. I hadn't been out there for a few weeks because I had spent some time in Beijing, but yesterday I went running again and found that in my absence one of the many horse corrals surrounding Lashi Lake had poured concrete paths through the forest to make improvements to their tourism industry. I thought the forest was fine with just a dirt path, but I don't guide horses for a living so what do I know. What really sucks about the situation is after the workers were done the they just threw the used cement bags on the side of the newly paved path. 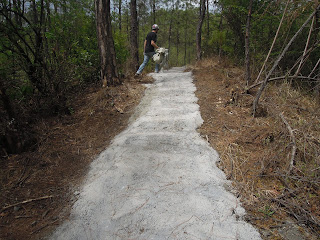 Today Brandon and I went back to take some photos and pick up the old cement bags. It was kind of a useless gesture as there was still a bunch of other trash strewn about the place by who-knows-who? 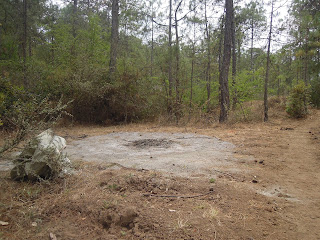 I have always been frustrated by how Chinese workers mix their cement. They dump the dry cement mix into a pile on the ground, make a little pit on the top of the mound to mix in water, and work their way down till the cement is finished. But what is left over every single time is a hard concrete slab the size of original cement pile, leaving that patch of ground absolutely useless. Me and Brandon had to break one apart that was left in our backyard after some workers came and built us some walkways. 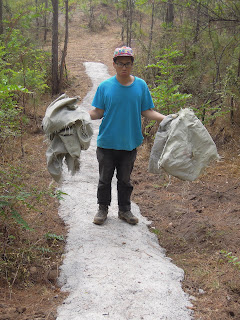 Brandon is not happy at all. Notice in the background that the trail just stops suddenly? Most of the trails didn't seem to start and stop with any purpose, they were just put there to be there, almost like the horse corral had a bunch of cement bags laying around and didn't know what else to do with them. 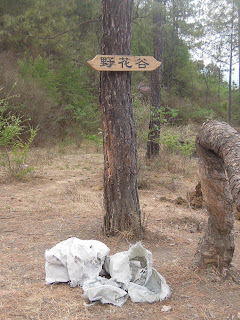 They also put up these beautiful new signs naming the different trails that tourists get to ride on. This one is named the 'Wild Flower Valley' 野花谷. Sounds beautiful doesn't it? But did anyone think about how beautiful it would to see a bunch of trash and cement bag along the trail? Probably not, and I am not surprised. These forest trails are covered in garbage, mostly thrown by the horse riding tourists. Cigarette packs, water and beer bottles, candy wrappers... But these tourists might get their cues from the locals who visit one of the many cemeteries in the foothills bringing with them paper money to burn for the dead (chinese tradition) Not only are the cemeteries absolutely littered with this sacrificial money, but every inch of trail before and after the cemetery is also covered with. If you were to spend just one day picking it up A.) there would still be plenty left on the ground B.) you would be filthy stinking rich in fake ghost money.  Oddly, the fake notes are labeled as Hell Bank...... 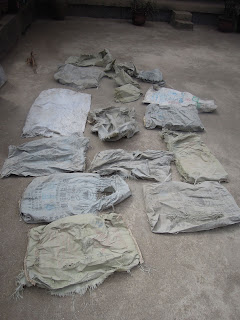 We picked up 15 bags, and counted 5 cement mixing spots. We are sure there are more cement bags that had just been blown away by the wind. Lots of the bags we did find we pulled from out of the trees. Now at each one of the 24 horse corrals around Lashi Lake (and we have been to all of them) is a sign from the local government listing rules and regulations, one of which is it is illegal to throw your garbage on the ground. As of last year in China it is also illegal to smoke in public indoor places like restaurants and hotels, http://articles.latimes.com/2011/apr/30/world/la-fg-china-smoke-20110430
but anyone living in China today knows what a hilarious joke that is. There is absolutely no enforcement. Like it says in that above article 'The costumer is God.' If they want to smoke inside they can smoke inside. When we interviewed the 24 horse corral owners (at least the ones who would answer our questions) they said it would be rude of them to require their clients NOT to litter on the trails they are visiting for the afternoon. And so making these laws are simply an act, feigning an attempt to keep the public healthy from second-hand smoke, same as making littering illegal. No politician actually cares about protecting the environment, but it looks like they do.

What can be done? After seeing the cement bags and other garbage yesterday I had one idea of simply posting sign along the trails (just below the new signs posted by the horse corrals) reminding their patrons that they are Guests to Lashi Lake and to the forest and that they need to treat it with respect and not treat it like a garbage can. Well... I mentioned this idea to the director of our Environmental Protection NGO, and I was quite surprised that he shot the idea down faster than one of the horse corral owners probably would have. Hell one the horse corral owner might have even been in favor of the sign, you know, to feign an attempt to do the right thing but not actually make any effort to enforce it.
Our director was certain most people would see the sign and simply ignore it, which unfortunately in most cases would probably be true, but it would work for some people, and isn't that enough reason to go through with this amazing easy and simple plan????? "Besides, we are not a environmental watch-dog, we are an environmental educational group" he told us. Brandon and I thought it made a good bit of sense to use two strategies at the same time to be more effective. (we are putting up the sign regardless of our negative nancy boss) 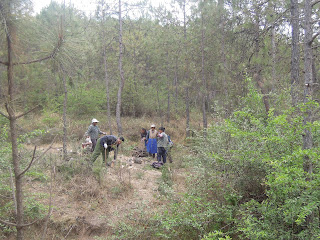 One the way back from cleaning up the trails we run into these villagers cutting down trees, most likely to burn as fuel. In 1998 China issued a nation-wide ban on all logging. They government issued this just after the flooding of the Yangtze River that killed 3,000 people and left 14 million homeless, http://en.wikipedia.org/wiki/1998_Yangtze_River_floods  The cause of the flooding was traced back to  Yunnan and Sichuan Provinces where excessive logging had stripped hills of their forest cover causing water to runoff into the rivers instead of soaking into the soil. This causes the rivers down steam to have more water flowing through its valleys (flood) than if the water had been absorbed into the soil up river. 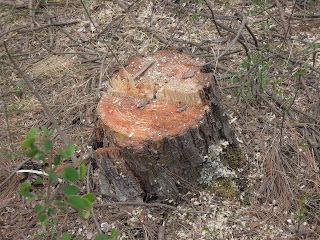 Because most people use the trees as fuel in their kitchens an alternative fuel had to be found. Luckily it was already in existence. Biogas.  http://en.wikipedia.org/wiki/Biogas I can't sing enough praises about biogas. Its amazing! You use the poop you get after eating, to create gas, that you use to cook the food to create the poop thats create the gas that cooks the food that will............... you get the idea, it's a brilliant little system that provides a free, sustainable energy source. The government subsidized the construction of over 6,000,000 biogas digesters, mostly in Yunnan and Sichuan Provinces to be used as an alternative to cutting down tree to burn for fuel. But people don't like to use them, deforestation is easier than maintaining a biogas digester, which is incredibly easy to maintain if you know how to do it. Thats the other problem with solutions to problems within China. The government came in, build a bunch of digesters, then left without making sure people knew how to properly use them. So now days majority of the 6,000,000 biogas digesters in China go unused. We try to get people around Lashi Lake to start using their biogas digesters again, using the unimaginable amount of horse manure that paves each and every road around the lake. But it is more convenient to break the unenforced ban on logging, cut down the forest and wait for the Yangtze to flood again.

It gets harder and harder to give a shit when it seems like nobody else does.

If you are interested in learning about just how screwed the Chinese environment is/will become, I recommend reading this great/depressing book "When A Billion Chinese Jump" http://site.whenabillionchinesejump.com/

In all fairness one can't be too upset with the Chinese mindset to consumer culture and neglect to the environment, after all China has only been in sync with the world economy for about twenty years and is just following the model of mass consumption and environmental degradation that was perfected for half a century by us in the western hemisphere. 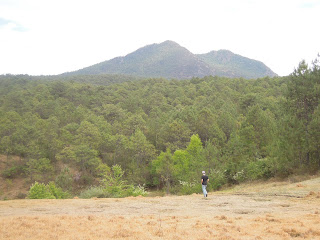