Hello hello hello!!!
So I have been in Yunnan for about a week and it has already been action packed!!! Lots of hiking and biking, digging and building, and meetings with NGO directors and Vice-Village Chiefs!!!
Heres a recap
So After the 41 hour train ride from Nanjing into Yunnan Province me and my class mate Brandon's first stop was Kunming. There we stayed with our friend Levi from Hungary that we met on CouchSurfing.org (i cannot sing enough praises about that website. i recommend it to anyone that wants to travel on the cheap) We spent one day walking around the beautiful downtown, managed to find our way to the top of one of the highest buildings in the city (Levi has only lived in Kunming about a month himself, but hes quite adventurous found his own way to the roof) That night we slept on
his roof to see the stars at night (I have not seen any stars while living
in Nanjing so it was a treat) His roommates were all fantastic folks
from Spain, France, Tibet and Israel. I also helped him make bike polo
mallets in the hope that he will start the first Kunming Bike Polo Team. 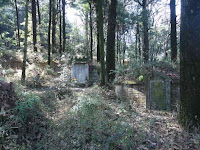 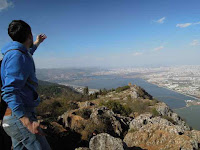 The next day we rode his janky janky bikes to Xi Shan Mountain. It looks over the city from the west. We were heading up the normal hiking trail till we noticed a lesser traveled path and headed that way. We found hidden buddhist shrines! Old cemeteries! And some of the greatest views from the top of mountain! Once we got to the peak of the mountain we walked through a stone forest that dotted the top. We were like mountain goats hopping around till we got to the highest peak looking over the city on Kunming. And I Sang For Joy!!! 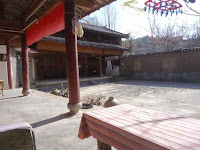 After saying good-bye to Levi and Kunming we got on a night train to Lijiang. We got there at 9am and we were met by are new director Mr. Chen Yongsong and he drove us about 8km west to our new home of Lashi. Its a small village of less than 40 homes on the bank of a huge lake. Theres probably about 20 villages all around the lake, mostly working in agriculture and horse guides for tourism. Are new home is a traditional Naxi
compound (Naxi are the indigenous peoples 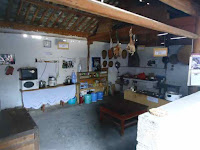 of Yunnan) We live and work in the same place. It is called the Yunnan EcoNetwrok Green Education Center. It is a local NGO that spreads awareness of sustainable living within rural settings. It is pretty difficult to properly take care of garbage out here, most of it is just dumped on the side of the road, which is too bad because it is so beautiful out here piles of rubbish quickly ruin it. Lots of other trash is burnt in order to get rid of it. So we do what we can to get folks to sort their trash properly, recycle, dont throw trash in the streams... pretty simple, but unknown to many people out here. Other than that, the folks at the Green Education Center advocate a low carbon lifestyle. All of our hot water somes from solar water heaters on our roofs. We use biogas to cook our food. BIOGAS is methane created from fermented human and pig waste and composted organic material. Our outhouse sits on top of a large tank that has gas pipes that lead to our kitchen, it works amazingly! Despite how the food in cooked, it has all been delicious. Are meals are all included with our internship, and one of the volunteers is an amazing cook, and I have been eating the best I have ever eaten in a long time. 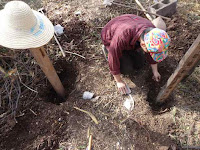 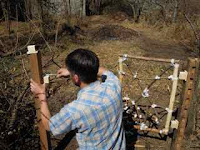 We will be taking part in many projects over the next four months. One small project that started the first week was cleaning out part of our neighbors back yard and so we could use it as a hang out spot for visitors when the arrive. While most people were pulling weeds and such, Brandon and myself got to build a gate connecting the two yards. We decided to make a simple double door with a little bit of traditional Taiwanese design of random wood tied together. It was great to do a bit carpentry again, but it was pretty hard with the crappy selection of tools we had at our disposal and the selection of reclaimed wood. But after a few days we got it taken care of. Other than that we are getting ready to start mapping the local villages and potential environmental threats, I won't go in to them now, but it has to do with the 23 or so horse corrals around the lake and all the horse poo poo that makes its way to the water ways... 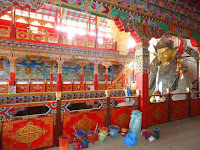 Lastly, yesterday we took our first bike tour around the lake. It took about 5 hours with stops, but we guessed it would be about 2 1/2 hours to bike continuously around the lake. It is very big, the roads are crap and there is no direct road around, we have to cut in and out of farmlands. Yunnan is on the eastern border on Tibet and you can see the influence everywhere. While biking around the lake we stopped at one Tibetan temple high up on the mountain side. It was the first time I had seen Tibetan monks. They were all wearing red robes, spinning the huge decorative copper cylinders and doing other Tibetan monk activities. We went all the way up the hill behind the main temple and found another temple that was being renovated. Inside was bright and colorful as all the walls had just been repainted. Other than gorgeous wall art there was just one enormous deity statue, and no one inside, it was amazing. While continuing through the villages we found some
kids to play soccer with in the street, and a great Taiwanese restaurant. Good times.
Thats all up to today. We are getting ready to start mapping in the next few days, we are starting to design a new chicken coop for our four chickens, and carving signs for the Education Centers exhibits to replace the old paper and color pencil signs made by the last interns. Hope all is well, I'll post more later as more things happen. Take Care and Safe Adventuring!!!